OFTEC (the Oil Firing Technical Association) and the FPS (Federation of Petroleum Suppliers) are planning a new joint consumer awareness campaign in 2016 to encourage the 500,000 plus owners of single skin oil tanks to consider ‘upgrading’ their tank to a better one. The awareness campaign comes at a time when oil prices are at record lows and the hope is that consumers will invest in their tank with the money saved on fuel. 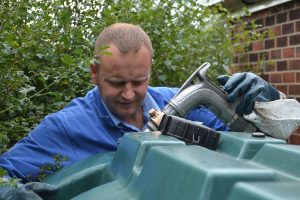 Let’s look at the different types of oil tanks and consider whether you could improve your tank set up:

Single skinned oil tanks can be made of plastic or metal and will have one layer of containment. Only having one layer of protection obviously makes this type of tank more prone to damage from vehicle impact and weather corrosion which may end with a spillage. A secondary containment system is recommended to go with a single skinned tank such as masonry or concrete surround to protect the tank from accidental contact with passing vehicles and to capture any spillages. ‘Integrally bunded’ means a tank within a tank. This offers much more protection to the oil. An outer layer of protection cuts down on temperature fluctuation within the tank and limits the chance of the tank being pierced. Due to the pipework being internal, this cuts down on corrosion and deteroration of parts. The outer layer can hold 110% of the inner layer’s contents. If an oil tank sits within 10 metres of any water course it must be bunded to limit any environmental contamination. If the tank is situated in an institute (school), a commercial or an industrial site you should almost always use a bunded tank (if exceeding 200 litres capacity).

This is a tank designed to refill vehicles and machinery. It has added protection against theft, a dispensing measurement and is specially designed to capture fuel spillages.

Also known as a twin walled tank, a double skinned tank has the added protection of a second layer but unlike the integrally bunded tank, it does not enclose pipework or have the same capacity to capture spilled oil.

According to the OFTEC website, latest industry figures* show the annual cost of heating an average home with an air source heat pump for example is £1,453 – almost twice that of oil. With such a huge difference in running costs, in addition to the upfront installation costs of between £7,000 and £19,000 for renewable systems, it is not surprising consumers have been reluctant to take up this step. The industry is more than keen to offer advice and help to anyone wishing to invest in the future of their heating oil system.