If the Labour party is successful in the May 2015 general election, it has promised to implement plans to ban fracking in groundwater protection zones. Shadow Energy Minister, Tom Greatrex tabled a change to the Infrastructure Bill going through the House of Commons, which would ban hydraulic fracturing (fracking) in land which falls in one of these protected zones.As the population increases and the creation of new reservoirs is stunted, more and more groundwater is being extracted by the water companies for public supply. The worry is that fracking, a process of jetting a brine-chemical solution into shale rock to force out natural gas trapped in-between, is a haphazard process that may end up contaminating drinking water and destroying the underground environment in which the groundwater is contained. 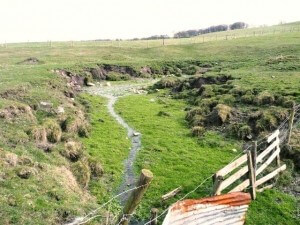 A third of our drinking water in England and Wales is provided by groundwater. The water sits underground in an aquifer, an aquifer is a body of saturated rock through which water can easily flow. A delicate balance of rock will ensure the correct environment for aquifers to exist. Aquifers must be both permeable and porous and include such rock types as sandstone, conglomerate, fractured limestone and unconsolidated sand and gravel.In some Southern areas of England, groundwater supplies up to 80% of the drinking water, making protection for this critical resource vital. The Environment Agency (E.A.) has designated Groundwater Source Protection Zones (SPZs) for nearly 2000 groundwater supply sources. These include boreholes, wells, and springs used in the supply of public drinking water.The Prime Minister David Cameron a strong proponent of fracking, previously told MPs it is “irrational” to oppose shale gas.In a speech to world leaders in Davos last year, he said he can “understand the concerns some people have”.He claimed the UK should have the “right regulations” but warned against “burdensome, unjustified or premature regulatory burdens”.Greenpeace UK energy campaigner Simon Clydesdale said: “The government clings on to the fig leaf of its supposedly world-class fracking regulations [but] Labour’s proposal to ban fracking close to aquifers is a matter of such basic common sense that it’s hard to see what excuse ministers could come up with to oppose it.”