Fracking gets the green light

North Yorkshire County Council's planning committee voted by seven to four to approve controversial plans for fracking to start in the village of Kirby Misperton. The last time such plans were given the go ahead was 2011. The fracking proposal has created furious debate between local residents, farmers, landowners and the fracking company Third Energy. Fracking is the process of drilling miles down into the ground to find layers of shale rock. Once the shale rock is located, a mix of water and chemicals is blasted into the rock forcing the gas pockets trapped in between the rock to rise to the surface. 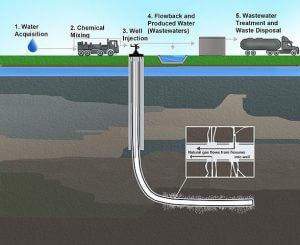 Residents are frightened that this process is unnatural and may force poisonous gas out into the local environment. They fear that nearby waterways will be contaminated by the water / chemical mix. Although the protests have been kept to a local level, the fear is that the go ahead in this tiny North Yorkshire location will be the mark of things to come on a national level. Anti-fracking campaign group ‘Frack Off’ has laid out a stark warning that the plans could pave the way for thousands of fracking wells to spread across Yorkshire and many other parts of the country. The UK government sees fracking as crucial for future energy needs. However new licences for the technique stalled in 2011 when tests on the Fylde coast in Lancashire found that fracking was blamed to be the probable cause of minor earthquakes in the area. Chief executive Rasik Valand of Third Energy said it now has a "huge responsibility" to deliver on its commitment and "to undertake this operation safely, without impacting on the local environment." The UK Government has said it is going "all out for shale" to boost energy security and the economy. This choice has bitterly disappointed Greenpeace as they would like to see more investment in renewable energy. Ken Cronin CEO of UK Onshore Oil and Gas Industry said: "UKOOG welcomes the decision that has been taken today by North Yorkshire County Council, which helps to dispel many of the misleading claims that have been made about this application, as well as the process of hydraulic fracturing more generally. We look forward to Third Energy being able to conduct a test to see how much gas is under this area of North Yorkshire to power and heat homes and businesses.” For more news from the oil & gas industry, please click here.